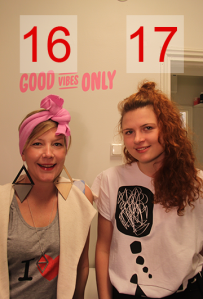 Number 16 and 17 of this interview countdown to Christmas are Tiina Palm and Ivanda Jansone, both fashion designers with an eco-approach.

I met them in their shop in Kallio where we talked about Helsinki, life and time travels.

Where are you from and for long have you been living here?

Ivanda: I’m originally from Latvia and I’ve lived in Finland for more than seven years.

Tiina: I’m from Finland and moved to London when I was young and grew up as an adult there. I came back to Helsinki in 2008.

Tiina: I love Helsinki. When I moved back, it felt like anything is possible; the attitude here has changed a lot. There’re are so many people starting up something new, for instance Ravintolapäivä or Siivouspäivä. And they get it done, even though there’s not really a huge financial backup. And since Helsinki is quite small it’s possible to share ideas with a lot of people.

Ivanda: I like it as well (laughs). It’s a city where a lot is happening, but then it’s also easy to find a silent corner, for example by the sea. The closeness to nature itself is amazing. 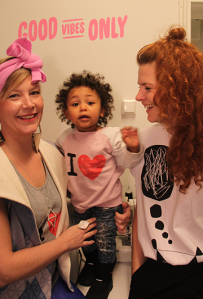 Do you have a favourite place?

Ivanda: There’re so many nice places here. I used to live in Herttoniemi. There you find beautiful shores with rocks and it’s so nice to sit and to look out onto the sea. In summer I moved, so now I have the next favourite place. There are rocks again and you can look out quite far, you can even see Linnanmäki. The country I come from is really flat, so maybe that’s why I have a thing for this.

Tiina: Similar to that I love the seaside; so anywhere by the sea can be a favourite spot. But I have to say Kallio as a part of Helsinki, that’s where my heart is. Not just Kallio, also the surrounding areas. It’s unlike anywhere else in Helsinki. I want to work towards making small businesses in these areas succeed better.

You both have a sustainable approach for your products, what does that mean? And how come?

Tiina: When I finished my fashion design studies in Lahti, I was hesitant about producing clothes, because it felt like the fashion industry is evil (laughs). So first, I started to produce zero waste jewellery and accessories. Later in 2012, while I started my first clothes collection, I realised that the zero waste approach also works well for other products. It’s called zero waste because all my fabrics are leftover materials bought from storages. It’s basically about street wear, so I produce colourful hoodies, shirts or dresses, earrings and much more.

Some months ago Pure Waste textiles, a Finnish company that upcycles textile waste, had a fashion show called Waste Side Story. I was one of the designers and after that they’ve also started to sell fabrics to smaller producers, so now it’s possible to buy their materials. That’s what I’m going do in the future.

Ivanda: It was a similar thinking that made me start doing it, because I wanted to find a compromise between this need of creating something new, but harm the environment as less as possible. I make printed clothing and I started with screen-printings, so I’m creating my own prints for t-shirts, leggings, dresses or sweaters. I always try to find fabrics that have an eco-standard. However not all of my fabrics are made out of organic cotton. But at least they are produced without chemicals, for instance the dying process is less harmful. The local factor is also important. Everything is made here in Kallio. I have a seamstress, who works just around the corner. It could be cheaper to order from somewhere else, but it’s also important to give local people a job.

Ivanda: Basically everything, nature, being somewhere, meet people, see some art. I don’t have this constant search of inspiration. I also like to be alone, sit down in the forest and be out in nature. That’s maybe my kind of meditation to get a clear mind.

Tiina: Happy people, music, travelling; now, my daughter inspires me a lot. My last digital print collection was about Finland and Jamaica. I did all the prints with my own logo, but I used the colours of the Jamaican flag. This country has inspired me so much, the people, its music and culture.

What is your dream?

Ivanda: I have smaller dreams that change all the time. But what’s not changing is the dream to be happy, feel satisfied and free.

Tiina: Just to live in peace. My biggest dream is to have a house at the seaside some place warm (laughs) and to be able to have a beautiful garden and grow all my own food when I’m old, so let’s say in 40 years. Before that I just want to feel at peace and inspired almost every day.

If you could travel in time, where would you go and what would you do?

Tiina: Actually, I wouldn’t because I don’t see the point. If I really could, I don’t think I would want to. Honestly, I’m trying to learn to live in the present. Every day my spiritual journey is to try to be present. I don’t feel the need to go anywhere.

Ivanda: Because it’s scary if you start to think about it, for instance could you use your present knowledge in another time? If you travelled in time, could you really live there normally?

Tiina: Even in my own life, even if you just went back two weeks, I wouldn’t want to go back or forward.

Ivanda: Actually, I’m just reading a book called ‘the time traveller’s wife’ by Audrey Niffenegger. The main character travels unpredictably in time, to lots of different places and that’s pretty scary, so somehow I would also be scared to go anywhere. I wouldn’t be so curious to be in a different time. Travelling to other countries in this present time to see new stuff, that’s nice, that’s better.