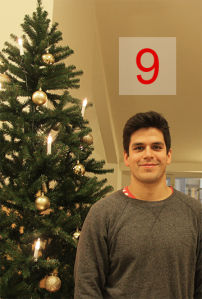 My number nine is Luis Benalcazar, student and barista, who is literally from the opposite side of the globe.

For how long have you been living here? I moved here two years ago. My girlfriend, who is Finnish, and I met in my home city Melbourne. She was on exchange. It’s a bit cliché, she happened to move in with my best friend, so I had a lot of incidental hangout time with her. We became good friends and then I fell in love and she was finishing her exchange and I decided that I would see how far that rabbit hole went, and so we moved together to Helsinki.

How do you like Helsinki? I really like it! It’s got a unique character. It’s a city, but it has also a bit of a cosy community feel. Melbourne with five million people is a much bigger city. So I enjoy the atmosphere, especially in summer and springtime, when people are out and they’re having a good time.

Naturally, it’s totally different to anything I’ve had before, having definite seasons that change in a week or two is insane. I’ve never had that before. That has been unique and I really like sports, so I’ve enjoyed winter sports and learning how to cross-country ski and ice-skate. Now I’m just waiting for the snow to come.

Do you have a favourite place in Helsinki? I’d say that one of my favourite suburbs is Kallio because it reminds me of the suburb where I grew up in Melbourne, where there’re always people on the street and there’s café life and bars. You get your drunk and whatever, but it has a lot of soul. I think Kallio reminds me the most of that. In terms of a specific place, I like Katajanokka, that little strip of old renovated warehouses with brownstone walls and exposed timber. It’s really nice and cosy.

What do you do for a living? I work part time as a barista at Fratello. It’s a speciality coffee place, just opposite of the main university building and we have our roastery in Punavuori.

But I’m mainly studying English Philology; it’s the study of the English language that includes literature, linguistics and also history about the language, and translation studies. It has been pretty good so far. It’s my first semester here and I’m enjoying it.

How often did you radically change your life? I never really thought about it, but maybe every few years so far I’ve had a big change. I changed my studies and career paths two times, my father passed away, which is a big event and then I moved here, which is a pretty big event. I guess I’d say maybe every three to four years something happened.

Do you miss Australia? There are definitely periods where I do miss home, but for me it has always been more of missing people and friendships that I’ve had had; more than a physical place. I think if you have enough friends and connections you can mitigate the feeling of isolation that you can have when you move overseas.

What have you been proud of lately? I think, learning Swedish to this level in such a short time and then using it to get into university. When my father passed away, psychoanalytically speaking, maybe a bit of my masculinity was taken from me. So I guess, I lost a bit of faith in myself, so it was really good for me to prove to myself, I still have my mind, it’s still there, I just need to apply myself. That’s been my proudest thing.

What is your dream? To finally finish a degree (laughs) – third time lucky. And I like to be an English teacher. That would be my dream at the moment, and to have a life with my girlfriend that’s sustainable.

The older you grow, what is getting easier for you? That’s a tricky question. In some way I think it’s getting easier to acquire new ways of thinking, not necessarily knowledge itself but epistemology of things, so learning how your mind works and knowing how you learn and understanding yourself a bit better that way. I think that helps me, also to filter people as well in terms of friendships – so picking people you know you’d get along with, that’s a bit easier as well.

What was a funny moment here? Coming from an anglo-country, meaning a former British colony, I think in some ways we’re a bit prudish. My girlfriend’s family has a ‘Mökki’, a Finnish summer cottage and she just warned me, so okay we’re going to my cottage and there’s just a lot of nudity, and my family is naked, and all my relatives are naked and you probably have to be naked, too. Initially the sauna culture was a bit of a shock for me because in my country we sexualize the human body, so you cover yourself unless you’re in the bedroom. Here it’s really great and now it’s not a big deal anymore, you go into sauna and it’s just people in their ordinary state, there is no taboo around being naked.

One thought on “Luis”