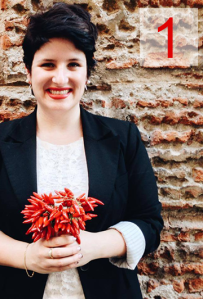 Number one of my very first interview advent calendar is Veronica Fossa. She is the founder of Wefactory, creative entrepreneur and a wild girl fighting for delicious food all over Europe.

It was a rainy Sunday in October when I interviewed her. While we talked, literally everything she owns was lying around in her apartment in Töölö. Veronica was packing her stuff, about to leave Helsinki again for a longer travel.

Where are you from? I’m originally from Zané, a small town about 90 kilometres from Venice, in the northeast of Italy. I lived there until I was 21 and then I moved abroad. So I’ve been living abroad for six years now. Zané has about 7,000 inhabitants, so it’s quite tiny and I never felt comfortable there. I always felt that I wasn’t really fitting in and that I needed to move to a bigger city.

Since your work is mostly about food, I want to know what’s your favourite food? That’s difficult. In general, I think it’s chocolate. I love it. But of course, the list is quite long. We could go on with ice cream and there could be some Orecchiette. That’s a typical dish from the south of Italy. Orecchiette means little ears in Italian. But I would say number one is definitely chocolate.

How do you like Helsinki? We have a love-hate-relationship, and I mean, I’m really grateful to Helsinki because I grew up in the way that I’m today. So I became really independent. I’m also really grateful, that I managed to do many projects here and could prove myself what I’m able to do.

Then on the other hand I feel a bit sad about Helsinki, because I don’t think it’s able to retain talents the way it should. There are a lot of really talented people coming here and they like Helsinki, but for different reasons, which are often language issues, they are forced to move elsewhere, because they don’t find a job or they are not completely integrated into society. And what I like a lot about Helsinki is that it’s a really clean and safe city. In the beginning as a woman I really liked how safe Helsinki was. You could go anywhere and nobody would bother you. Nature is everywhere and the summer is really stunning!

What is your favourite spot in Helsinki? If I had to choose one, I’d go for Café Regatta. I discovered that place when I came here six years ago and I remember that I went there with every person who has visited me. It has a really nice view. The coffee isn’t good. Not at all. Korvapuusti, the Finnish cinnamon rolls are quite yummy. It’s really authentic; I like that kind of place. It’s really beautiful, also to go there and watch the sunset.

What do you miss most about Italy? I mean in general, when living abroad? Well, I’ve been living in four countries and all of them are located fairly north and part of Europe, so I could say the thing I miss most about Italy is the kind of easiness when it comes to relationships. I’m not talking about romantic relationships, simply the relation between people. Of course, in Italy it’s so easy because we share the same culture and this level below culture.

If you could ask someone a question, what would be your favourite question? ‘What did you have for breakfast?’ That tells a lot about people.

When you think about your work, what motivates you to do what you do? When I think about my work, it’s a lot about passion; but it’s also about being part of a movement where you have other peers, who are fighting in a positive way, bringing that kind of change that you would like to see. And my work is related to food, so quite often those people are moved by passion and not by money. There’s a lot of time and effort you need to put into it, until you become maybe very famous (laughs).

What have you been proud of lately? I’ve been quite proud of my experiences in Russia. Because it just started off in a random way and then it developed really beautifully. So I was invited to Kaliningrad to give a speech about street food during this conference, which was organised by a supper club called Stay Hungry. I shared my experiences working in the Nordic countries on food related projects and a lot about food culture and urban environment. The feedback I got from people was really positive and then somewhat I decided just to take the risk and travel to Moscow and see how it could be like. So that was quite interesting because I know that not everybody would take the risk of going there, just out of curiosity.

When did you stop being a child? I like to think that even as an adult we can still be childish sometimes and I really wish that there could be a playful side of me in everyday life. It’s quite nice with some people, because they manage to get the childish side out of you. I think it would be quite boring if grown-up people would always be serious about everything. So I appreciate a lot people who can let their childish side out, by being also mature at the same time.

Well, we are in your apartment and usually I ask that question when we are in a café, still your bag looks promising, so I ask: What do you have in your bag? I have my wallet. My camera, two lenses because I’ve been conducting an interview for my work. A Hay pocketbook from Copenhagen. A pen. Lip balm from Sweden. Or is it American? It’s really good though. Then this thingy which I received as a gift from a friend, it’s by Ivana Helsinki. I have an umbrella, of course, and then I have some Finnish chocolate. And last but not least, my business cards.

What book do you read at the moment? Anna Karenina by Tolstoy.

What is your dream? I think I have short-term dreams at the moment. As a long-term dream I’d like to have a family with three kids and to be professionally admired. Perhaps, become some kind of leader who is kind and respected and can inspire other people; regardless of the precise industry I’d be working in.

What was your funniest moment in Helsinki? At some point I got some funny job offers. One of them was to act in a Finnish TV show called Kliikka Mua. That happened just from one day to the other. I said yes, sure, I never say no to these things because they are quite fun.

The other one was to dub a character from a short movie, from Finnish to Italian. I’ve never dubbed anything before, so I was quite interested and I didn’t know how it would be. But anyway, last autumn I was invited to this studio. The character I had to dub was a really strong woman, a warrior, making these “harrrr” sounds (roars).

Since my voice isn’t as loud as hers, it wasn’t so easy to get into the character. But the funny situation was that I had to scream out loud and my throat got really dry and this character also had sex at some point, so the producer tried to tell me what I should do. That was quite a challenge. We laughed so much and repeated the scene so many times, until he was finally happy with it.

Thank you, my dear!